Cruise ships are built with special technical aspects such as top class navigation system, early warning system, modern communication system along with the satellite phone facilities, latest survival crafts, lifts, escalators, helicopter landing pads and many more facilities. Some of these ships are used to carry nearly 3,000 passengers at a time.

These types of ships are numbered to be around 1,000 in major ship operating countries. They take people to different locations for pleasure trips all over the world to individual countries where tourist attractions are found while they are traveling between destinations the passengers on board were entertained and dined luxuriously in specially built halls and lounges. 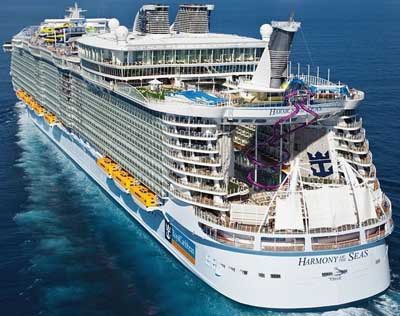 Passengers have their separate luxury rooms with all the facilities along with their own mini bar. Because of the nature of the cruise ship business, there are many different kinds of jobs are available in different kind of fields. Thousands of people are employed to look after each section. The jobs can be divided in to some main categories such as deck officers, cadets, deck crew, engine room officers, cadets, engine room crew, catering crew, service providers and entertainers.

All the officers, crew and catering crew must have their professional marine schooling and certificates required as per the marine authorities of the International countries. Cruise ship companies won't recruit Deck, Engine and catering service providing crew and officers without these qualifications and certificates.

All the 4 largest cruise ships 1, 2, 3 and 4 belongs to Royal Caribbean International and another larger one "Symphony of the Seas" is expected to join their fleet by 2018.